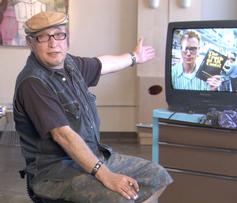 Hit of the Festival Circuit Will be Streamable for All Devices

FELL, JUMPED, or PUSHED will be available for streaming after its WORLD PREMIERE at Arena Cinema in Hollywood, CA on November 4, 2016.

A freewheeling mix of doc- and mockumentary, FELL JUMPED or PUSHED follows a cast of Christopher Guest-y, wannabe documentary filmmakers with zero experience, setting out to save the world by making an important, feminist film.  Trouble is, they and their hapless leader, Todd Peters, have no idea how to do that or what their masterpiece should be about. Fact and fiction commingle as they turn their mockumentary cameras on an unsuspecting, real-life family of women in Spokane, WA. Our crew of sweet-natured, Guffman-esque goof-ups gets busy making a mess of things, probing their subjects about their actual lives, and antics ensue. When they stumble upon the bizarre tale of the sudden disappearance of Sgt. Elmo “Curly” Warrick, the family’s beloved patriarch, things start to take a personal turn. Will our visionaries without a vision find their focus? Or will they fail to see the gripping story that’s right in front of them?

Fell, Jumped, or Pushed is a movie about the many ways we run from ourselves; whether we are running to romance, running from mediocrity, or
​running off of a cliff...

“Fell, Jumped, or Pushed is what an independent film should be: Original and smart.
A very funny movie”
​~ Jay Leno

“Fell, Jumped, or Pushed has the flavor of an early Woody Allen movie.”
​~ Soren Anderson
The News Tribune

“Fell, Jumped, or Pushed is everything you want in a ‘mockumentary.’ It’s odd, loose, truthful and twisted, a beautiful example of comic ensemble mayhem. Even more, though, this gem of an independent film is a big-hearted portrait of hapless, misguided ambition, just achy with love.”

“Once in a great while, you see a movie with an ensemble of brilliant actors and you just know they will all be very famous one day. This is that movie.”
~ Eugene Jarecki
Director, Why We Fight